Berry Pomeroy Castle is located near Totnes and Paignton in Devon. Ghosts have been seen by many, many people there and the majority of the ghosts seen have been during the day! 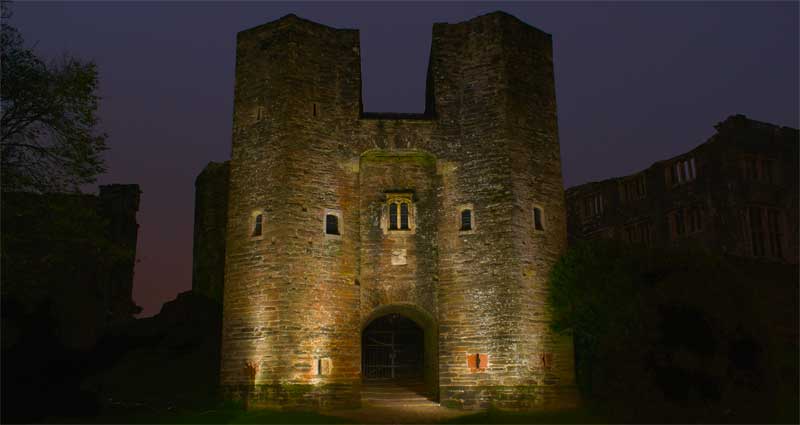 This section of my site details the ghosts I've seen there, ghosts that others have seen
and also some pictures of ghosts.

My interest for Berry Pomeroy Castle started back in 1987 when I went up there with a group of friends on our motorbikes. I don't think I had ever been as scared. The walk down from the top of the footpath is about 1/2 a mile long in the pitch black with trees overhanging on both sides.

I absolutely did not believe in ghosts and thought the people claiming to have seen one were probably barking mad. Well, until you see one you won't believe it. I am a very mature person and worked for the Devon & Cornwall Police as a Special Constable for 9 years. I don't drink and I don't take drugs and I am wary of stories by nature. I have only listed the sightings I have seen that have been witnessed by others. I see no point claiming something I've seen alone.

One more thing. Once I saw my first ghost I was addicted to the adrenalin rush it gave me which is why to this day I still go back. Some people rock climb, others jump out of planes. I go after Ghosts to get my rush.

My first sighting came a year after my first visit when 2 of my friends and their dog came over at about 11pm and asked if I wanted to go up there. I grabbed my coat and torch and off we went.

We parked at the bottom footpath and started heading up. Their dog was anxious all the way up and as we reached the top through one of the slit windows we could see a light as bright as we had ever seen. It was so bright it was lighting up most of the windows inside the main entrance.

We thought it might be someone messing about so we went up to the window. What we faced froze us to the spot. No more than 10 feet in front of us through this window was a figure dressed like a guard with it's face staring down at us. We could see right through the figure to the wall behind it.

It just stared at us moving his head from side to side. It seems like ages but probably no more than a minute later my friend say "Let's get out of here NOW!". As he said it the face moved right up against the window and gave a really evil grin and we could see most of his teeth were missing we were that close. All this time their dog was frantic. Hair up and backing away from the window.

The night of 20 witnesses at Berry Pomeroy Castle

I first went up with 1 friend and my dog. All the way down we could hear a hair standing shriek and my dog was more nervous than I had ever seen him before. We had both heard foxes before but this was waaaay different. We were reluctant to go down and decided to go slow and turn back if this shriek gets any closer.

We got down the castle and this shriek was still on the other side of the field. After only a few minutes the shriek had stopped from across the field and in milliseconds was in front of us. My dog went berserk and run at full speed up the footpath followed closely by us.

As we got to the top we saw 18 people pulling up in various cars. We told them what just happened and told them not to go down. They all laughed and said it was a fox. Anyway after 15 minutes of disputing their claim they said they were going down and we should come.

I spoke to my friend about it and we were both of the opinion that there is some safety in a group of 20 people and the noise had stopped so we went back down with them.

When we got down to the bottom standing in front of St Margaret's Tower was a glowing figure of an old lady. A dozen of us plucked up the courage to go over there so we walked up to within a foot of this figure. She didn't speak but all of us somehow heard her say "Beware of the hour". The time was 00:50

She just stayed there and by now some of the others were scared and I admit I was getting worried also. We walked back to the rest of the group who were by now standing by the entrance to the castle.

we were all looking at our watches and as it struck 1am the women vanished and this shriek was back but this time it was deafening and I really mean deafening! As it started the solid, 15ft wooden gate in front of us started shaking so violently we thought it was going to break free.

A dozen torches shining on a wooden gate shaking off its hinges without any person near it was enough for 20 of us to run back as fast as we could. We were definitely not welcome there that night!

Did you know that 80% of all ghosts at Berry Pomeroy are seen during the day?

I went down with my dog alone around sunset in the summer and there were a few people down there also. After about 20 minutes I noticed a man walking on the other side of the green. He made me look because of the way he was dressed. He was wearing the kind of clothes I would expect someone of the castles hay-day to wear.

I put up my arm and waved at him. He stopped, looked at me, then as he took his next step faded out completely. A couple of the other people there saw the same thing and we all walked over. My dog was in front of us and as he got the exact spot we saw the figure he froze. All his hair stood up and he back away whining.

Isabelle, the child of Berry Pomeroy

This one is probably the scariest Ghost that used to be down there because unlike all other Ghosts Isabelle could leave the confines of the Castle. I was down there with a few friends and we saw the Ghost of a child inside the main building right at the top.

There is only the shell of that building left so we knew no-one could go up there. One of my friends must of upset her due to his messing about before we saw her because we all went icy cold and while walking back up to the car we all felt her following us. we got into the car which also went icy cold.

We got back to my place and went inside which also went icy cold. She stayed with us for a couple of hours before leaving again. She made her point very clear and I never invited that friend down again.

The near fatal death Kitchen incident at Berry Pomeroy Castle

I have always maintained that the Kitchen is by far the single most haunted and evil feeling part of the Castle. I don't know why but I once had a very close call.

The kitchen is again just the shell of the building at this is going back many years when they had started renovating it. We had seen something moving about in there but couldn't actually see what exactly it was. We decided to go and take a look inside the Kitchen.

As we approached it I felt something push hard against my leg and I fell over. I shone my torch down and there was only grass there. Money fell out of my pocket and vanished, around a dozen coins. We entered the Kitchen and we heard an almighty scream echoing all over the Castle and as that happened I heard a noise above me.

I glanced up and out of the corner of my eye I saw something falling down at great speed towards me. I dived out the way just before a hammer came crashing down at the spot I was in. It came down at a force so strong the hammer buried itself inside the floor. we shone our torches up at the top of the building and there was nothing there. We decided we were not welcome there that night and left.

There are many more Ghost sightings I have to tell about this Castle and I will keep updating it as I get time.